The ‘Replicator’ Has Arrived

Forget everything you know about 3D printing — the ‘replicator’ is here.
Rather than building objects layer by layer, the printer creates whole structures by projecting light into a resin that solidifies. 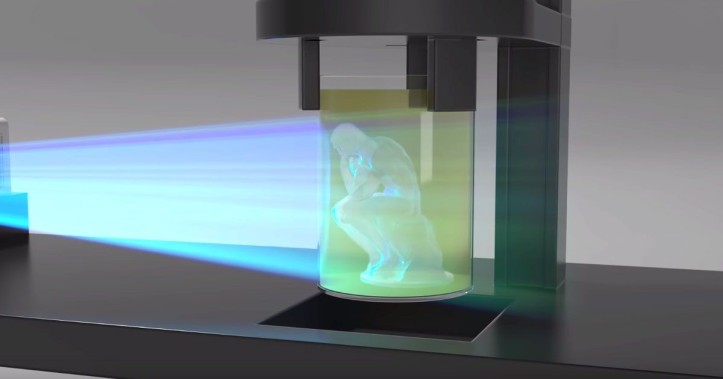 They nicknamed it ‘the replicator’ — in homage to the machines in the Star Trek saga that can materialize virtually any inanimate object.

Researchers have unveiled a 3D printer that creates an entire object at once, rather than building it layer by layer as typical additive-manufacturing devices do — bringing science-fiction a step closer to reality.

“This is an exciting advancement to rapidly prototype fairly small and transparent parts,” says Joseph DeSimone, a chemist at the University of North Carolina at Chapel Hill.

The device, described on 31 January in Science, works like a computed tomography (CT) scan in reverse, explains Hayden Taylor, an electrical engineer at the University of California, Berkeley.

In CT machines, an X-ray tube rotates around the patient, taking multiple images of the body’s innards. Then, a computer uses the projections to reconstruct a 3D picture.

Stop the press
The team realized that the process could be reversed: given a computer model of a 3D object, the researchers calculated what it would look like from many different angles, and then fed the resulting 2D images into a ordinary slide projector. The projector cast the images into a cylindrical container filled with an acrylate, a type of synthetic resin.

As the projector cycled through the images, which covered all 360 degrees, the container rotated by a corresponding angle. “As the volume rotates, the amount of light received by any point can be independently controlled,” says Taylor. “Where the total amount exceeds a certain value, the liquid will become solid.”

This is because a chemical in the resin absorbs photons and, once it reaches a certain threshold, the acrylate undergoes polymerization — the resin molecules link together into chains to make a solid plastic.

The remaining liquid is then removed, leaving behind the solid 3D object.

The process is more flexible than conventional 3D printing, Taylor says; for example, it can create objects that enclose existing ones. The resulting structures also have smoother surfaces than can be achieved with typical 3D printers, which could be helpful for manufacturing optical components.

The scientists suggest the method could be used for printing medical components.